Romulus On The Rock 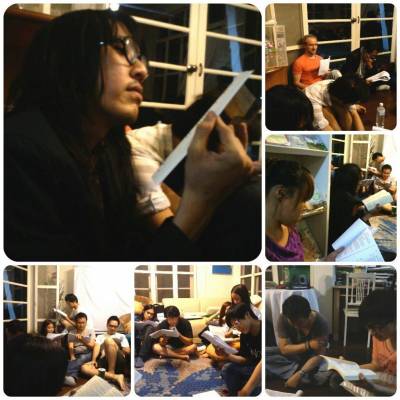 The next play that I’m involved in is called “Romulus On The Rock”. It is based on “Romulus der Grosse by Friedrich Duerremat. It is an exciting production by Moradokmai directed by Naai Tan.

The picture to the right was taken at our first reading at the beginning of March. The play is entirely in Thai using old Thai language or the language of the King. A lot of the expressions and phrasing I have never heard or used before. I’m playing the german general Odoaker.

I practice everyday a little bit in order to get fluent and to pump the script into my head. It’s exciting becuase I think until now no farang actor has ever gone to this extend and it is a big step for me.

For the longest time I felt like my Thai was stagnating at the same level. Not getting worse, but also no improvements. Working with the script forces me to learn new vocabulary and expressions and already I can hear them being used in everyday life.

The main character Romulus is being played by Saifah and I’m looking forward to working with him on stage. I’ve seen him in several productions before and always looked up to his performances. In Romulus I’m going to have a long dialogue just with him.

The show will have live music which I also love in live performances. It creates a special atmosphere that cannot be beaten by music from a tape.

Another aspect of working on a new show is meeting new people. I’m always excited to meet new people who are working in theatre. Common spirits with a common love and passion. It doesn’t matter where on this planet.

The show will be in May. A lot of rehearsals to go.